What a fantastic weekend opened by our very own Town Mayor, Cllr David Attfield on Thursday 11th April 2019. Our thanks to all our customers, volunteers and helpers, to quote just a few:

"I had guests on both the Thursday and Friday nights and they all thought that this was one of the best Beerex events – so well done all!" from GN

"This just gets better every year - thanks for a great event again, and The Nefarious Picaroons on Thursday were really awesome - great night" from BH

In case you missed the dates for 2020, well, so did we having to postpone first in April and then in ASugust due to the Covid-19 pandemic. For 2021 its 15th-17th April 2021 so please get the dates in your diary now, and please remember, all 2020 tickets not refunded will be honoured in full at the corresponsding session in 2021. The ew remaining tickets will be sold online for 2021, so watch out on the website in autumn 2020 or send your email now to beerexpr@farnhamlions.org.uk with a note to add you to our emailing list for Beerex tickets.

We are always looking for volunteers as well to help run this huge annual event, and if you would like to help in 2021, please download a volunteer pack by going to our supporters page.

If you would like to download more pictures taken at Beerex they are all available on google photos here. Just click here to access and view all we have. Our thanks as always go to the AFFCC photographers who  covered the event so well as always.

The 42nd Farnham Beerex, held at The Maltings from April 12th -14th 2018, was again a great success. It celebrated in particular the 40th year that cartoons for the programme had been drawn by Bill Tidy, who has served us proud for four decades. In this years programme we reproduced all the front pages of the fourty programmes, so that everyone could appreciate his artistry, even though they may not have attended all the events and built up their own collections. Many thanks Bill!

The 42nd Farnham Beerex, held at The Maltings from April 12th -14th 2018, was again a great success. It celebrated in particular the 40th year that cartoons for the programme had been drawn by Bill Tidy, who has served us proud for four decades. In this years programme we reproduced all the front pages of the fourty programmes, so that everyone could appreciate his artistry, even though they may not have attended all the events and built up their own collections. Many thanks Bill!
The event was again supported by 350 volunteers, who gave their time for charity, so that the funds raised by Beerex were not reduced by paying for staff. Again a huge thanks to all that helped.
The Maltings came up with the great idea of having the cooking done at the front of the building instead of the courtyard, which removed the smoke problem which was severe in 2016 and 2017. Well done to them.
We do not know yet the figure for the amount raised, though it will probably be a little less than last years record figure. On Saturday evening, there were some difficulties with the trains, so that a number of attendees had to leave the event early. More than the usual amount of beer had to be returned, and under 20,000 pints were drunk, but still a serious amount in itself.
The event also highlighted a number of beers from Cumbria – we have started the custom of having a themed bar (two or three bays anyway) which allowed us to have 10 ales from that area. We had started with a “long list” of about 40, which like Beerex in general (which had over 110 breweries in total in the long list we started from in September) had to be whittled down to reach the number we eventually obtained for the event. This year also we had 11 Perries, and 22 Ciders for those who are not such great beer aficionados. The beer selection was excellent - or that was the general feedback so congratulations to, go to the beer committee. If you would like to suggest a theme for 2019, or just a brewery you favour, please contact us at beerexbrewery@farnhamlions.org.uk

Thanks for your support as either a helper, or a visitor, I hope you enjoyed it as much as we did and I look forward to seeing you again in 2019.

A special welcome back in 2016

Farnham Beerex is  the longest running beer festival in the country at the same location since it started in 1977. 2016 was a special year - our 40th Annual Beerex in Farnham. Now well established in co-operation with both the Farnham Maltings and CAMRA, this event is the major fun and fundraising event for Farnham Lions. Staffed by well over 300 volunteers, all of whom are unpaid, its a truly unique event that is firmly fixed in the town's social diary. 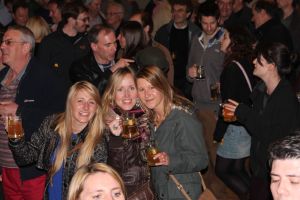 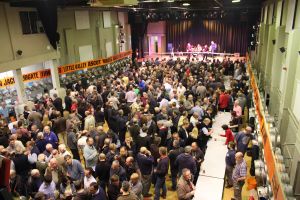 More information about Beerex will be posted as plans for our next festival become firm in early 2017. So please bookmark this site and watch for updates. In the meantime if you are interested in helping to swell the numbers of helpers, who are all voluntary, please send an email to bxstaff@farnhamlions.org.uk and we will contact you with a volunteer information pack - its fun so please do get involved. 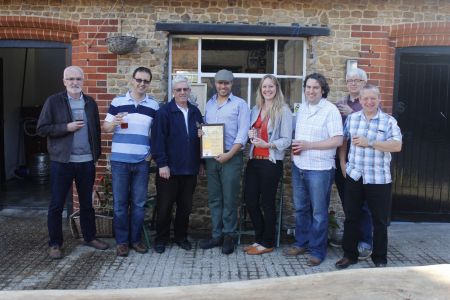 Few Real Ale enthusiasts in England will be unaware of the Farnham Beer Exhibition (Beerex) and the fame of this event has spread much further afield. Coach parties from all over the south are a regular occurence every year. Around 5000 imbibers descend on the town for a few days each Spring to sample the year's selection of fine ales, ciders and perries, munch on BBQ food and hear the great bands playing.  Typically there are around 70 beers available from approximately 30 breweries and all tastes of ale, bitter, stout, IPA, porter, ciders and perries are catered for.

Thanks for all of your support in 2015 at our 39th Annual Beer Festival.

Well done to everyone who helped in 2015, and made it yet another huge success. In fact yet another all time record year....

Beerex 2015 was held on Thursday 23rd  - Saturday 25th April. And the results were Ł38,042 raised for Lions' charitable purposes, the vast majority of which goes to help those in our local community.

Farnham Beerex’s 39th Annual Beer Exhibition opened its doors on Thursday 23rd April 2015 at 6pm in the evening in a blaze of wonderful weather ensuring a great night was had by all. With all the beers available on tap and some wonderful new and exciting ales available, the atmosphere was guaranteed by a fully participating crowd of 1300. Opened by the Mayor of Farnham, Cllr Jeremy Ricketts, this year’s first night created something of a record. For many, many years the evening had been the Cinderella of the event not reaching sell-out status for sometime. But with new breweries, new beers, St George’s Day and wonderful sunshine a record attendance was a certainty.

Great music from local band Straubenzee and a full barbecue available all helped the consumption of ales to go beyond the 20,500 pint mark with over a further 2,000+ pints of cider. This sort of popularity ensures that Farnham’s festival continues its reputation of being a unique social event and the longest running festival to be held in the same venue anywhere in the UK.

To visit a whole gallery of pictures from Beerex's past, please click here

All profits are for the benefit of local charities